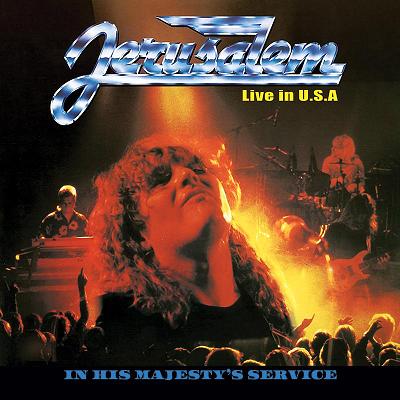 In His Majesty’s Service (re-issue)

“In the niche market of Christian hard rock there had really never been a live album that was so good it was a career defining moment, but by the time the 1985 release In His Majesty’s Service – Live in the USA hit the shelves the band had close to a decade of touring under the belts. Jerusalem mostly toured abroad, with their huge equipment that weighed five tons. That was more than any other Swedish hard rock band. Between 1983 and 1985 Jerusalem made several very successful tours in the USA, which finally resulted in Live In the USA recorded in Shreveport and Dallas. The album showcased Jerusalem’s radical presence on stage with Ulf shouting a heart-piercing “Wake up Mr. Christian”! In His Majesty’s Service never got a proper CD re-issue in English until now. With several compilations having songs from the album, this 2018 Retroactive Records re-issue is the first time the album has been made available on CD featuring all the original songs! This Rob Colwell (Bombworks Sound) Legends Remastered version adds warmth, depth and sonic clarity to perfection. Retroactive Records has packaged this gem in a jewel case with a 12-page insert featuring band pics and lyrics. Great pains were made to make sure this classic was given the full re-issue treatment, knowing Jerusalem fans have waited decades for a proper CD reissue. Well, here you have it! For fans of Deep Purple, Van Halen, Resurrection Band, Daniel Band, Barnabas and The Scorpions.″ -Retroactive Records

TRACK LISTING:
In His Majesty’s Service
From The Bottom Of Our Heart
I’m Waiting For You
Read Between The Lines
The Tide
Ashes In Our Hands
Can’t Stop Us Now
Time
Man Of The World