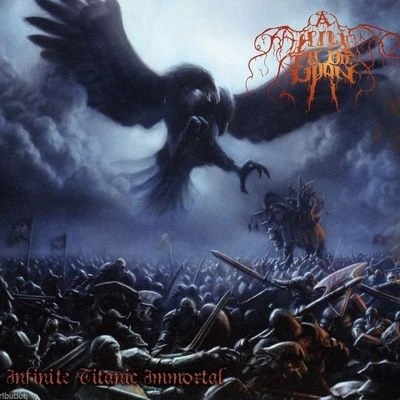 “Melody crashes into brutality and breathes new life into the black metal scene with the debut from A Hill To Die Upon. Coming to us from the corn fields of Illinois, A Hill To Die Upon sounds more akin to their musical brethren, raising the banner of Norwegian black metal with their own twist. Though technical and brutal at the core, each song is melodic and possesses a unique atmosphere. The core of the band is 2 brothers, Adam and Michael Cook, who formed the band several years ago and began a long musical journey until they found their place in the annals of frost-bitten European black metal, and the result does not disappoint. The vocals are brutally crushing, the guitars shred, with Adam joined by Elisha Mullins, and the bass is thunderous, featuring none other than Ravn (Frosthardr). Michael is a prodigy on the drums and seamlessly switches from skull splitting1000 mile per hour blast beats to mid-paced technical parts to slower sections to create a sonic soundscape of finesse colliding with utter brutality. Perhaps the most amazing thing of all is that 3 of the 4 members are under the age of 20. Also not to be missed is the outstanding artwork, a commissioned original painting by Bogdan from Serbia, which is easily one of the best extreme metal covers ever designed. If you feast on the sounds of bands like Behemoth, 1349, Dimmu Borgir and Antestor, or just love your black metal extreme while retaining some semblance of melody, and you are looking for something fresh, look no further than the debut from A Hill To Die Upon. It is melodic black metal brutality of infinitely titanic proportionsthat will make mere mortals quake where they stand.” -Bombworks Records