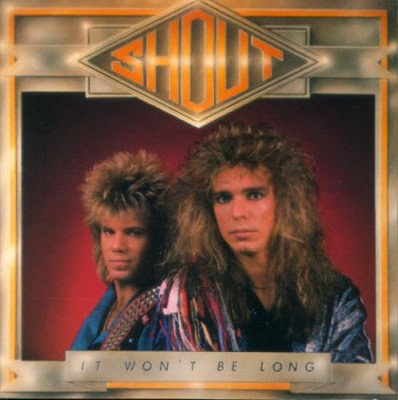 It Won’t Be Long (re-issue)

“Shout was a 80’s metal band formed by Ken Tamplin and Chuck King. Shout’s first album IT WONT BE LONG was released in 1988 with their sophomore follow-up IN YOUR FACE releasing in 1989. Both of these albums have been completely remastered by Rob Colwell of Bombworks Sound and come with song lyrics and in-depth band insights provided by Chuck King and Ken Tamplin in these handsome 8-page booklet jewel case re-issues. The stories that Ken and Chuck share are nothing short of amazing and explain the miracle that almost never was, stories from the road as well as photos and even some surprises which we are not announcing quite yet, but will soon. In 1987, Chuck was playing with the band Idle Cure but looking for more of a permanent role in music and simply trying to find the right path. Ken Tamplin was a guitarist in the band Joshua and was himself wanting to try something new. Shout was born. Shout signed a deal with Frontline Records in 1987 after submitting a 3 song demo to Frontline and went on to record their first album “It Won’t Be Long”. It was recorded with session musicians including Lanny Cordola (Magdalen), Marty Friedman (Megadeth) and Michael Angelo (Nitro) but soon after he recruited bassist Loren Robinson and drummer Joseph Galletta from his former band Joshua. Tamplin and King made quite the duo and were able to not only put together amazing harmonies, but had the screaming guitar hooks and vocal chops that rival some of the biggest bands of the day. Shout commanded immense and almost instant respect from the growing mainstream metal community the second IT WON’T BE LONG hit the market. Very few bands even came close to touching this masterpiece. Shout focused its efforts on music quality, something that the Christian rock fans were really clamoring for. Too many bands of that era focused 90% on ministry and 10% on music. Shout had no interest leaving ministry behind, but knew that the industry needed top quality musicianship. The Encyclopedia Of Christian Music cites them as begin even more competent than Stryper. It Won’t Be Long begins with the fast paced NEVER STOP that includes one of the best bridges you’ll ever find on an album. WINNERS AND LOSER, the 2nd song, was an anthem that took fans by surprise. It included over-the-top melodies and fist-pumping onslaught of drums and duo-guitar work. But when the title track IT WON’T BE LONG starts off, you find out that this album is going to have one hit after another, with power metal anthems throughout and one of the best front-to-back run of songs of any album to come out of the 80’s. The song SHOUT summed it all up with it lyrics “Shout it out, never let it take you down. Shout it out, livin’s what it’s all about“.” -Girder Records

TRACK LISTING:
Never Stop
Winners Or Losers
It Won’t Be Long
Find A Way
Dancin’ Round The World
Shout
Showdown
Timeless Love
Without You