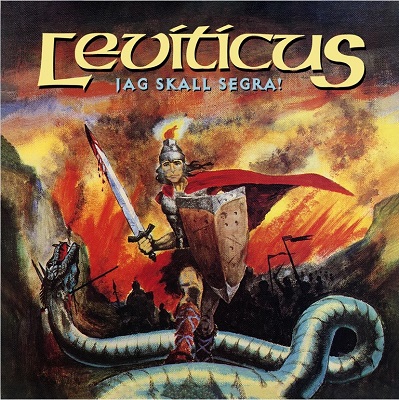 “In Sweden this just may be the album that started it all for Christian metal and, if not, it is definitely coveted as one of the earliest true pieces of Christian hetal history regardless. Jag Skall Segra is the debut album from Christian rockers Leviticus and after its very early success the band would return to the studio and record the English version of this album entitled ‘I Shall Conquer’.. and the rest is Christian metal history folks! This album is a very special piece of Christian metal history. It sounds so very Swedish, yet it has so much in common with what was going on in the New Wave Of British Heavy Metal movement from 79-84. Roxx Records is very excited to be bringing you this very limited and very special piece of Christian metal history. This album has never been released on CD and was only released on a very small quantity of vinyl originally. If found, copies fetch quite the price these days on sites. So this is the time! The album has been meticulously restored, with upgraded artwork and design by Scott Waters of NoLifeTilMetal and the sound has been remastered by Rob Colwell of Bombworks Sound. There will only be 200 of this very special album being pressed on vinyl.” -Roxx Records