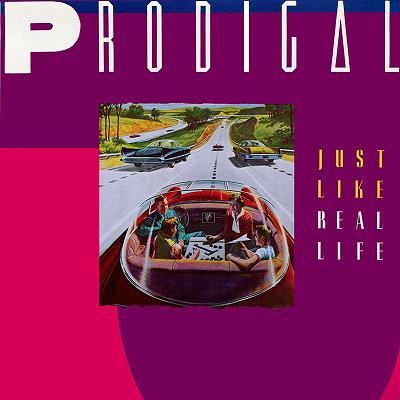 “The Christian Music Archive said of the band’s 3rd album, Just Like Real Life, “This is an excellent album by one of the early new wave/rock hybrid bands of the early to mid-eighties, using equal parts keyboards and rock guitar. Sadly the band didn’t get the recognition they so richly deserved, as this was a cut above most Christian albums of the time with instantly memorable songs and lyrics so intelligently written as to be in a class of their own. If they had been a secular band, they would have been early MTV stars. Just Like Real Life was one of CCM’s most original and authentic rock albums, merging the qualities of extremely well produced electronic sounds with a crunching and pulsing guitar throughout was virtually unheard of at the time. The constant theme running through this great project was alienation and lack of authentic relationship. Long before the iPhones, tablets and Facebook created shorter distances between those far away and longer distances from those closest to us, the world still suffered the same plight. We are longing for contact and yet move mountains between us out of fear and pride. Advancements in technology only serves to make the plight more obvious. This would remain a trademark for the band. Authenticity was a rarity in the industry at the time and this band had it in spades. Loneliness and longing juxtaposed against hope and mercy permeate all 3 projects. There is never a point when the listener feels preached at, but rather the point of view always came across as the band was in it with their audience. Music and culture critic DW Dunphy put it this way: “I always believed Prodigal was always in the frame versus being the commentator outside of the frame. There were never airs about being the sanctified one shouting “You need Jesus” but a recognition that we’ve all sinned and come short of the glory of God, especially the forgiven.” Just Like Real Life, the band’s 3rd and last album, is filled with so much great music and original concepts that any description will fail to do it justice. Ranging from hard new wave to American progressive rock and roll, there are 11 fantastic tracks here. Production quality is through-the-roof fantastic. The 2018 Retroactive Records CD re-issue has 4 exclusive bonus tracks, completely remastered and packaged in a jewel case with a 12-page insert featuring band pics and lyrics. Get this essential CD or splurge for all 3 Prodigal CDs (and the Loyd Boldman 1988 solo CD Sleep Without Dreams) while you can! For fans of Mr. Mister, The Call, Tears For Fears and the very best of anthemic 80’s driving pop and rock!” -Roxx Records

TRACK LISTING:
Future Now
Push And Shove
Safety In Numbers
Answering Machine
Under The Gun
Jump Cut (Just Like Real Life)
Incommunicado
Next Big Thing
Burn It Up
The Big Sleep
Just Make Up Your Mind