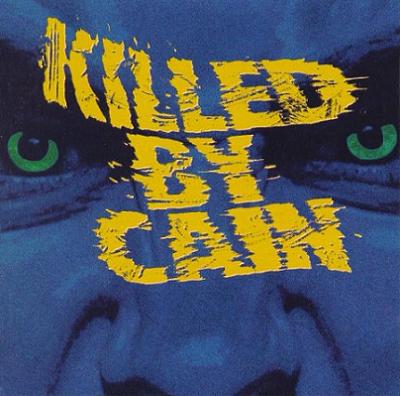 “This Louisville band started out as the infamous 80’s classic metal band Whiteray that released 4 highly sought after demos! By 1993 they had signed with REX Records and changed their name to KILLED BY CAIN. Featuring a much more aggressive metal sound with distinctive Metallica meets G ‘N R styled vocals and killer heavy metal more in line with the thrashing grooves of 90’s Megadeth. Listen for the album’s producer Dale Thompson’s (Bride, The World Will Burn) signature screams in ‘Sin City’ and ‘Introduction To Hyprocrisy’. Bassist Steve Curtsinger went on to play on several Bride albums as well as releasing a hard music masterpiece with the band Zoobabies. KILLED BY CAIN is full on metallic anger and rage at its finest. The music is hard and the message is socially relevant even in 2017! In all seriousness, this is the album Metallica should have made after the black album! These songs sound like they could have been the follow up to Guns ‘N Roses Use Your Illusions! For fans of Metallica, Bride, Tourniquet (Vanishing Lessons era), Guns ‘N Roses and Motorhead! The 2017 Retroactive Records re-issue of this album comes fully remastered by Rob Colwell (Bombworks Sound) on CD and is limited to 300 copies.” -Retroactive Records