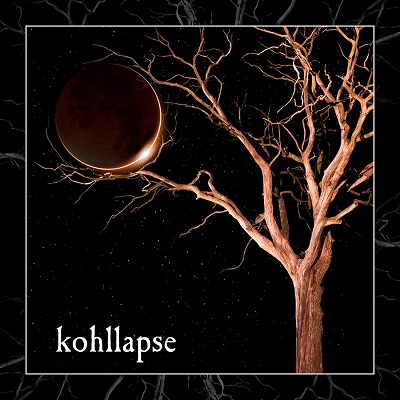 KOHLLAPSE, hailing from Australia’s capital city Canberra, self-released their debut album in 1996. This self-titled CD introduced the world to the band’s progressive brand of doom metal. It is an album of contrasts: heavy/mellow, slow/blistering, clean/growled, simple/complex. It is this variation that makes it engaging. It is at times majestic, at other times anguished or sombre, but always intense and precise. Well-composed and creative, every song is allowed space to breathe and is heavy in atmosphere, even when not guitar heavy.

This album has aged well and Soundmass is pleased to be re-issuing it in 2021 to make it readily available again. The audio has been remastered by Rob Colwell (Bombworks Sound), with new artwork and layout by Scott Waters (Ultimatum/NoLifeTilMetal). Recommended for fans of Virgin Black, Saviour Machine, Visionaire, Paradise Lost or Type O Negative.

TRACK LISTING:
Path
Tell Me Your Fears
Never
Towards
Take Me Away
My Child
An End To Pain
Self Infliction
Serenity