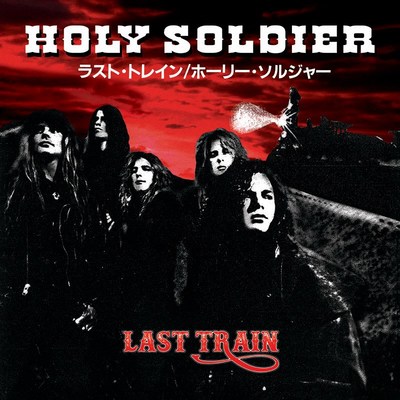 “Roxx Records is very excited to announce a very special re-issue from one of Christian rock’s most instrumental and influential artists of the late eighties and early nineties, Holy Soldier. Formed by bassist Andy Robbins and guitarist Jamie Cramer, Holy Soldier burst on to the scene in 1985 taking the Christian rock world by storm. The band played all over the US but very quickly built a large following in their home state of California. At one time the band held the largest attendance records at the famous Hollywood night club Gazzarri’s. By 1990 the band would release their debut self-titled album which would draw even more attention and success to the band allowing them to continue to tour and record. By 1992 the band would release their highly anticipated sophomore effort titled ‘Last Train’ which would even further their success and broaden their market reach across the world. The band would play live relentlessly, touring all over, winning two Dove awards and building an amazing following all over the world. “‘Last Train’ shows a band at the peak of their prowess. With grit and determination, Holy Soldier shows that they were not followers in a narrow glam scene but were an exceptional hard rock act that worked hard to create a unique sound that deserved more recognition than they received. All the years of slugging it out in the L.A. club scene were not lost on this talented five piece, producer David Zaffiro pulled out the best they had and helped to craft an under rated gem.” Keven Crothers (White Throne) This year marks the 25th anniversary of that sophomore release ‘Last Train’ and with that we are going to celebrate and give this classic release a much needed re-issue, giving it that special Roxx treatment. The music on this re-issue will be exactly as it originally appeared in 1992 track by track, but featuring a complete and new remaster done by J Powell at Steinhaus Remastering. It sounds amazing! In addition, this re-issue will feature some slightly updated artwork, but still keeping the integrity, look and feel of that classic original pressing. This brand new interpretation of the artwork, as well as the full layout and design, was done by Scott Waters (Roxx Records/No Life Til Metal). This limited edition pressing of 500 will mark the very first time this album has ever been pressed on vinyl!” -Roxx Records

TRACK LISTING:
Side A
Virtue And Vice
Crazy
Hallow’s Eve
Gimme Shelter
Love Is On The way