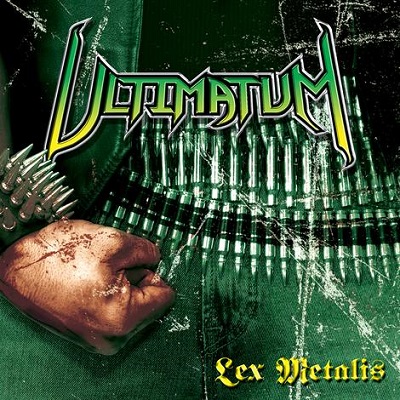 “ULTIMATUM is a metal band from New Mexico whose sound is a mixture of traditional heavy, power/speed/thrash metal and more modern grooves; brutal guitars, blazing leads, pounding drums, thundering bass and shrill, shrieking vocals. Ultimatum does not claim to follow any trends nor do they wish to do so. Ultimatum is great at writing good, heavy, memorable metal songs and has been doing this since their 1992 beginning! Lex Metalis (Latin for “Metal Is Law”) is the band’s fifth full-length release and follow-up to the destructive metal monstrosity Into The Pit (2007, Retroactive Records). With Lex Metalis, the band pays tribute to their metal heroes, putting their neck snapping, heart-of-metal stamp on some of the most cherished metal anthems! As always, the band stays true to their metal convictions, playing each song with power, might and authentic conviction. Vocalist (and author of NoLifeTilMetal.com) Scott Water, shows considerable influence from the likes of David Wayne, Roger Martinez and Blitz Ellsworth (and Cronos and King Fowley on the high, gritty and sometimes slurred parts). The band’s DNA is pure thrash metal and every song has their thrash and speed metal imprint – even the 80’s melodic metal tracks! In addition, the eight page booklet contains detailed liner notes explaining why the band chose these songs for this classic release that is destined to appeal to old and new fans! This 10th Anniversary Ultimate Edition includes a 16-page expansive booklet, new liner notes from band members Robert Gutierrez and Scott Waters, a new collage of photos, alternate cover photos and two new bonus tracks that fans have been requesting for years (Testament and Vengeance Rising), as well as song by song synapses by the entire band! ” -Retroactive Records