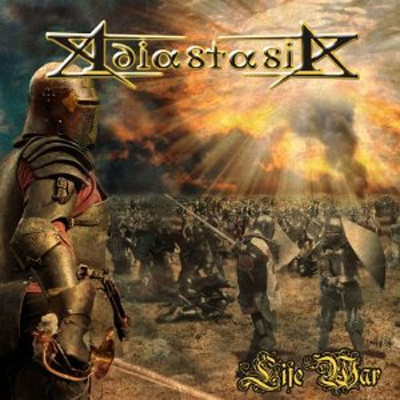 “The name of this powerful Brazilian band ADIASTASIA comes from Greek. It literally means ‘absence of separation’ or ‘non-separable’, but it can also represent the communion between the Father, the Son and the Presence of God! The band was formed in the beginning of 2003 by lead vocalist Jeff Winner. In 2004 the band played at Festival Rock where Winner received the prize of best vocalist. With this coveted award, the band began gaining a significant and loyal fan base, leading directly to the writing and recording of their debut album Life War in 2005. It was immediately picked up by Bombworks Records, released in 2006 and made its mark by selling through the first pressing in just a few short months. AngelicWarlord.com compares Adiastasia, with its double bass driven brand of power metal, to Stratovarius, Helloween and Gamma Ray, but it is certain to appeal to fans of Seventh Avenue and DivineFire as well. Searing vocals and vicious, progressive guitars abound throughout this power metal extravaganza, combining elements of speed and aggression with occasional symphonic touches that create quite a powerful full length debut. Adiastasia’s magic and charm is based around the classic tenor vocal style of Jeff Winner who occasionally cuts loose in operatic high pitched falsetto fashion. Winner is a world-class vocalist, bringing to mind Timo Kotipelto (Stratovarius) or even Rob Rock (Impellitteri). This 2010 Collector’s Edition re-issue has been completely remixed and remastered for a powerful and remarkable improvement over the original 2006 release. For added value it features all new artwork by Robert Wilson (Tourniquet, Bride, King James, Deliverance) packaged in a four-panel digipak for the first time ever.” -Bombworks Records