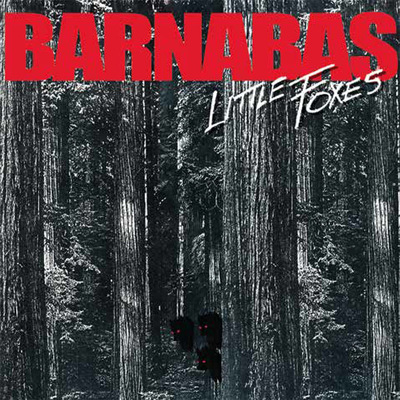 “On 1986’s Little Foxes, Brian Belew’s pyrotechnic guitar leads continued to push the sound of Barnabas over the top. He was well known as a human dynamo of an axe-man, one who routinely wow’d audiences by combining in-concert acrobatics with the fact that he never missed a note! Brian had an amazing ability to use tapping techniques (pioneered by Eddie Van Halen) in incendiary ways that had never been heard before in Christian rock. Gary Mann’s bass style was heavily influenced by bassists Geddy Lee of Rush and Dave Hope of Kansas. Gary drove the band from beneath, his playing coupling beautifully with the powerhouse drumming of Kris Klingensmith. Kris emerged as a talented lyricist, writing the words to nearly all of the band’s songs on the last three albums as well as the notable words on the back cover of the Little Foxes album. A lyrically harsh and distinct album, Little Foxes also contains some of Belew’s most notorious guitar work, along with NancyJo Mann’s most convicting vocals (her performances on “China White” and “Destroy After Use” are soul haunting!). Little Foxes marks the next step of Barnabas moving beyond the experimental and progressive sounds of Approaching Light Speed and Feel The Fire to embrace an all-out metal assault. “Auschwitz 87” is so fast and aggressive that the guitar riffs could have come from a Metallica or early Slayer album. “Destroy After Use” hammers away with monster metal riffs and terrifying passionate vocals that let you know in no uncertain terms that “the devil has a line on you.” Gone are most of the complex progressive pieces with keyboards that gave the listener moments to breathe on previous albums. Little Foxes is overflowing with urgency and is nothing less than full-on bombastic heavy metal at its finest! The band seemed to know their final collective voice needed music as heavy as the message. Even in 2017, the message and the in-your-face metallic riffage remain engaging and mesmerizing. For fans of Jerusalem, Philadelphia, Metal Church, Saint, Testament and Accept!” -Retroactive Records

TRACK LISTING:
Gospel Maniac
Little Foxes
Destroy After Use
Auschwitz ’87
China White
Sins Of The Fathers
All Alone
Suite For The Souls Of Our Enemies (Part Two – Lover)