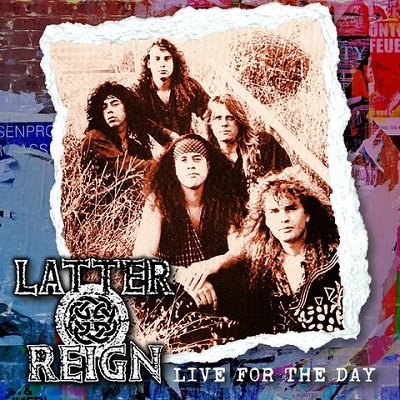 Live For The Day (re-issue)

“Roxx Records is kicking off 2022 with a loud bang! We are excited to be bringing in the new year with our first release of 2022 from classic Christian rockers Latter Reign. Latter Reign was founded by Ryan Cane and July Cardenas. July in turn would call upon Doug Bear to play drums and the three started jamming at a small church in Ontario, California. As the band began to get their grooves down, July reached out to Luis Cardenas to come and try out as lead vocalist for the band. They started practicing in Luis’ garage right after that, but it was short lived as Ryan and Doug would leave the band before they ever really got it off the ground. Luis Cardenas and July Cardenas determined to continue as they knew the look and feel of this band had great potential and they would begin spinning their wheels to keep Latter Reign going. In order to take the band to the next level they continued putting those pieces together to truly make this a viable professional rock band. July would next find Brad Smith, while Luis would bring in Glenn Graff. Lastly, Brad would invite Dave Bonavich to play drums and finally all the pieces were together and Latter Reign was rockin’ on all cylinders. Latter Reign would become a very well-known Christian rock band as they started to play gigs all over Southern California. They didn’t just play churches, though – they also went out and played clubs, bars and battle of the bands. Their philosophy was that most of the people that attend churches have already heard the word of God but the people at bars, clubs and secular events had not. Knowing this and taking it to heart, Latter Reign would go out and spread God’s word in places that many Christian rock bands would not dare do to go. They were also invited to many of the big Christian rock festivals and concerts in Southern California back at the height of their performing days, playing with bands like Fear Not, Barren Cross, Guardian, Bride, Switchfoot and many more. “Live For The Day” would be the first album that Latter Reign recorded. It sold well and got the band the recognition they needed back in 1991 to keep the band going strong. Up next the band would record one final track with this incarnation of Latter Reign, releasing the single ‘Desire’ which would be included on the Heaven’s Metal Vol. 1 compilation. This would be the end of this chapter for Latter Reign, but was it really the end… or just the beginning? To memorialize and capture this piece in the band’s history Roxx Records will be releasing a Limited Edition CD pressing of the original seven track album ‘Live For The Day’ coupled with two additional bonus tracks, being the track ‘Desire’ from the Heavens Metal comp and an unplugged version of ‘Winds Of Change’.” -Roxx Records

TRACK LISTING:
Prisoner
Real Love
Comin’ Back
Winds Of Change
Don’t Close Your Heart
Only Believe
Live For The Day