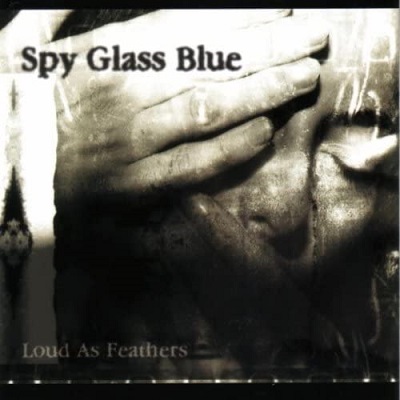 “Allan Aguirre is best known as the front-man for the punk band Scaterd Few. He formed Spy Glass Blue as a side-project to serve as his “artistic outlet” and to function as more of a ministry band. The group became his main focus for a brief interim (1995 – 1998) during which Scaterd Few was defunct. Shadows shows strong influences of general market artIists like David Bowie, Bauhaus, The Cure and Peter Murphy and so was immediately identified as a rare example of Christian goth music. Aguirre objects to the categorization but admits that “A lot of goths were into Scaterd Few” and that he “welcomes that audience.” Spy Glass Blue returned in 2002 with Louder As Feathers, once again waving their intellectual and spiritual lyrical flag to the rhythms of modern alternative music. The hook-laden, impassioned songs on this project are far and away their most engaging and enjoyable yet, as Allan Aguirre’s voice swoops and soars above their harmonic rock. The 2023 Retroactive Records re-issue is the first time this classic is available on vinyl. Each record comes with a 12″ insert and has been remastered for vinyl by Rob Cowell of Bombworks Sound. The vinyl also includes the Daniel Amos cover song as an added bonus track. Limited to just a 200 unit pressing.” -Retroactive Records

TRACK LISTING:
Light Machine
Turn And Remember
Because Of You
The Dreaming
Morning Star
Everything
Ophelia
(Looks Like) We Made It
Song For My Children
And I Go