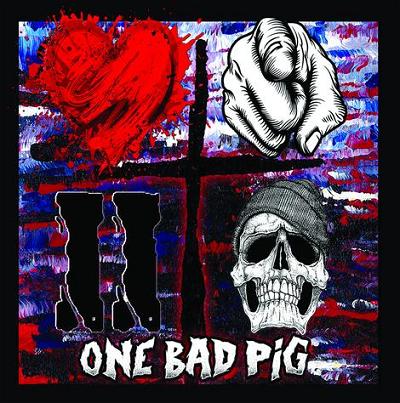 Love You To Death (re-issue)

“After a studio recording hiatus of a quarter century, One Bad Pig has come back strong. It turns out these rock veterans have stayed in touch with one another, playing the occasional one-off gig, having plenty left in the tank and still with something to say. Combined with the equal importance of musical talent to bring to the table, Love You To Death is 15 songs of relevance, energy and full-on rock! The Austin-based band’s fifth studio album is an impressive group of styles, equal parts punk, rock and metal. There’s plenty to like here, from the pop punk-ish “Teenage Royalty”, the old-school medley of “Sunday School Rawk” and the dirty metal of “Get Your Hands Dirty” (the former even features a lead vocal trade-off between Bloodgood’s Les Carlsen and Carey “Kosher” Womack.) The title track comes in fast with an incessant riff, snapping snare and a declaration of love in the face of disbelief and skepticism. Veterans of Christian rock will no doubt dig the pumped up cover of The 77’s classic “The Lust, The Flesh, The Eyes And The Pride f Life”. It’s a fun take and turns the chorus into an Irish pub sing-along, complete with the ubiquitous chants of “Hey! Hey! Hey!” A must-have new release from Christian music’s most relentless swine monikered punk/metal band! Originally released as a 6-panel digipak in 2016 by the band, all their units sold out and fans have been forced to pay huge sums of money for those original issue copies… until now! The 2019 Retroactive Records re-issue treats collectors to a 12-page booklet housed in a jewel case with lyrics, write up and band pics. Yes, it’s awesome!” -Retroactive Records

TRACK LISTING:
Love You To Death
What Does The Fool Say
The Lust, The Flesh, The Eyes And The Pride Of Life
Get Your Hands Dirty
Footwashin’
Sunday Skool Rawk
Teenage Royalty
Heads Will Roll
It’s Not Pig Latin (Itsay Otnay)
Judgment Stick
Straitjacket
Ben Moors
Red, White, Or Blue (Colour Me)
Tumbleweed
OMG