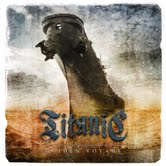 “This heavy metal classic was originally released in 1996 and has been out of print for over half a decade. Fifteen years later, the 2010 Collector’s Edition features stunning new artwork, while the music has been remixed, remastered and partially re-recorded. We extend a special thanks to the amazing Robert Sweet (Stryper) for providing real drums on this Collector’s Edition (the original recording featured a drum machine). We asked him to ‘really let loose’ and to ‘drum like you’ve always wanted to – with no restrictions’ and that’s exactly what he did! The result is a world-class heavy metal release with drums by a bonafide superstar! Guitar duties are handled by axeman extraordinaire Bill Menchen (Seventh Power, Menchen, Final Axe, Rev Seven, Redeemer) and the sudden impact vocals of Keith Miles (Final Axe, Holy Right) provide a powerful classic metal experience with vocals riffs that could power the Titanic! Melodic power metal fans have made it clear that Maiden Voyage is a classic worthy of its legendary, heavy-weight status! For fans of Judas Priest, Bloodgood, Neon Cross, Iron Maiden, Barren Cross and Saint.” -Retroactive Records

TRACK LISTING:
Nightmare
You’ve Got Nothing On Me
Gods Of War
And The Dead Shall Rise
Ocean Of Blood
Hollywood Bvld
I Don’t Believe
Fight Back
I Am Watching You
Freak Show