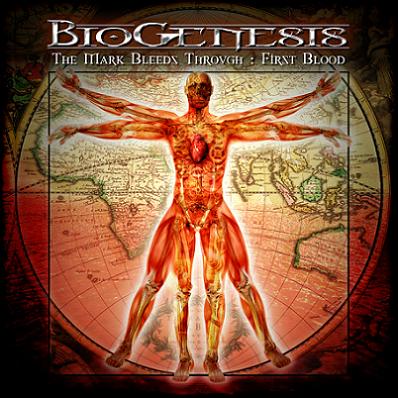 The Mark Bleeds Through – First Blood

Soundmass is pleased to be releasing BIOGENESIS “The Mark Bleeds Through: First Blood”. Originally formed in 1996 by front-man Chaz Bond (Jacobs Dream, Human Paradox), 13 years have passed since the release of their debut album “The Mark Bleeds Through” (2001, Rowe Productions). It has been little know, until now, that BioGenesis spent 3 months in the studio working on the recording of what was originally intended to be their debut album, which we are now releasing under the moniker of “The Mark Bleeds Through: First Blood”. After turning in the recording it was rejected by their label for not being heavy enough. The band returned to the studio to record the entire album from scratch in just a few days, resulting in the heavier (but arguably subpar) official debut. Along with a totally new cover and layout, we have also included 5 earlier demo tracks, bringing the song total to 17 and giving you 80 minutes of listening pleasure!

With a style that crosses genres, you can expect an album spanning from power metal to death metal, with a touch of progressiveness – a sound which is uniquely BioGenesis. Influences include Iced Earth, Cannibal Corpse, Fear Factory, Deliverance, Disturbed and Nevermore.

BioGenesis reformed in 2010 – 5 years after their apparent demise – with their original line-up. They have been playing shows ever since, turning it up a notch since the release of their 2012 album “The Rise, The Fall, The Rebirth”.

TRACK LISTING:
THE MARK BLEEDS THROUGH: FIRST BLOOD (2000)
The Mark Bleeds Through
Fat Man From China
Inner Child
Russian Roulette
Digging Your Grave
Mental Violence
Crystal Ball
You Are Not
Anti Evolution
I Am The One
Scorning Of Wisdom
Father Of The New Age