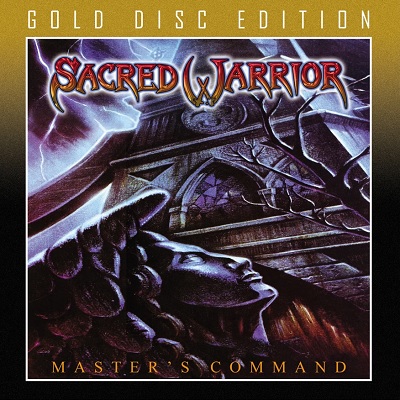 “There’s something about Queensryche influenced power metal that makes hard music devotees go weak in the knees. Perhaps it is the high-end, soaring and at times operatic lead vocals not unlike those of revered Queensrÿche frontman Geoff Tate. Maybe it is a technical proclivity rooted in the power metal aesthetic that also suggests of light progressive bearings. It might also be a high level of musicianship found in a guitarist both melodic and searing, intricate double-bass drummer, bassist that lays the detailed low-end foundation and keyboardist that underscores, but not to a fault. With Sacred Warrior, it is all of the above in light of its dark but sophisticated take on the power metal form. 1989’s Master’s Command displays the band in better form from a technical perspective, with chops well-honed from time on the road. While backing away from the power metal of their debut, the album is a strong collection of hard rock songs and includes the more melodic tracks “Paradise” and “Beyond The Mountain,” which season the heavy sound with catchy hooks and memorable choruses. “The Flood” offers a vocal duet between Parra and Roger Martinez of Vengeance. The album closes with what most consider to be its highlight, a heavy metal version of the traditional hymn “Holy, Holy, Holy.” Few albums could legitimately be the greatest Christian metal album of all-time. Master’s Command is a contender to such a lofty throne. It’s that good. And Retroactive Records has done everything possible to make this the ultimate CD re-issue of one of the ultimate Christian metal albums ever. The album has been digitally remastered by Rob Colwell of Bombworks Sound, packaged in a jewel case with a 12-page booklet and comes on an elite Gold Disc CD.” -Retroactive Records