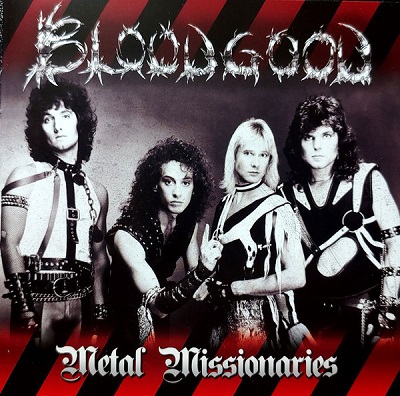 “When Bloodgood’s self-titled full-length debut stormed out of the gates in 1986 on Frontline Records, the Christian metal world rejoiced upon hearing this potent and thrilling mix of the killer riffs of David Zaffiro, the pulsating bass of Michael Bloodgood, the pounding drums of JT Taylor, all buoyed up by the melodic and barnstorming impact of vocalist Les Carlsen. The album, produced by blues rocker Darrell Mansfield, showed the band’s clear conviction for Christ and its solid Biblical lyrics. But attacks came from the mainstream metal industry who balked at using Christian lyrics wed to metal music and religious extremists branded the band’s music the work of the devil. The band soldiered on in the trenches of rock lighting a fire of trailblazing work that impacted many for Christ. Prior to this now legendary debut, the band had recorded and released in 1985 a 4-song cassette demo, called Metal Missionaries, which gave the world its first glimpse into the power of this band’s music and ministry. Selling over 5000 copies at concerts, this demo tape proved that this was a band that was here to stay as they lived up to their designation as metal missionaries. If you missed out the first time hearing these initial splashes of metal fury, or simply would love to go back in time and relive that initial excitement hearing this band, then start to rejoice that you’ve been given a second chance to hear this groundbreaking material. This Girder Records release features the demo tape on CD and catapults it into the modern world with the quality sound and packaging that is the standard protocol of the label. Featuring exciting bonus tracks such as an alternate mix of “Awake” that includes some background humor on the track showing a rare glimpse into another side of the band, and the original unedited pre-mix version of “Black Snake”, as mentioned in the Bloodgood movie Trenches Of Rock. Also included is a historical interview and a demo version of “Man In The Middle” from their comeback album Dangerously Close featuring Stryper’s Oz Fox, making this the definitive version to own. This is your opportunity to savor a slice of metal history not to be missed!” -Girder Records

TRACK LISTING:
Awake
Accept The Lamb
Anguish And Pain
Battle Of The Flesh