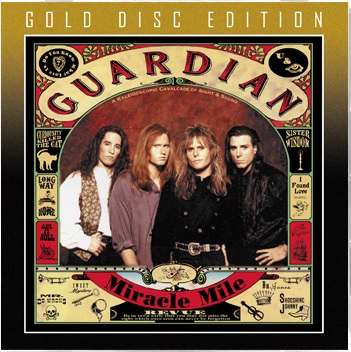 “Teaming up with Dino and John Elefante (Kansas/Mastedon/Pakaderm Records) for 1991’s Fire And Love album was a game-changing move for Guardian. The album was an overwhelming hit with fans, in regular rotation on MTV’s Headbanger’s Ball and the band turned into the consumate road warriors with extensive US touring throughout 1991 and a European tour with Stryper in 1992. With all the touring, the band made the decision to move, families and all, from Los Angeles to Nashville in order to take things to the next level. Not content to make their third album Fire And Love Part 2, Guardian reflected on two years of touring, all their success and began to dream of what album number three might be like. Bach was influenced by a movie that featured a turn-of-the-century carnival that had terrifying and mystical effects on the towns it visited. Bach was also fascinated with the religious tent revivals from the same period that had such a profound effect on the US landscape. He began envisioning an album that combined the two elements, with snake oils, side shows, carnivals and deep spirituality. The rest of the band bought in to this concept and Miracle Mile was born. The album demonstrates a band locked in as a cohesive unit, being fun, imaginative and creative in ways that pushed them far beyond anything they had ever done. Miracle Mile built off bands like Tesla, Extreme and Giant but was distinctly Guardian. Miracle Mile is the band’s undisputed Sgt. Pepper, their Appetite For Destruction, their Back In Black. This is the band’s defining moment, at the top of their game.” -Retroactive Records

This is a 500 unit pressing with a 12-page booklet, a write-up by bassist David Bach and the original cover on the flip side of booklet. Remastered by Rob Colwell of Bombworks Sound.

TRACK LISTING:
Dr. Jones And The Kings Of Rhythm
Shoeshine Johnny
Long Way Home
I Found Love
Sweet Mystery
Let It Roll
Mr. Do Wrong
Curiosity Killed The Cat
Sister Wisdom
The Captain
You And I
Do You Know What Love Is
Untitled