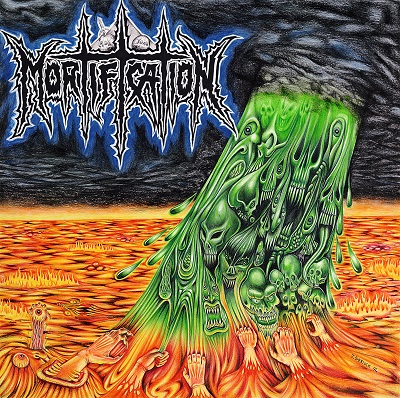 Mortification are the undisputed pioneers of Christian death/thrash metal and Australia’s most successful metal band. With releases on label giants like Nuclear Blast and Metal Blade, albums like “Scrolls Of The Megilloth” and “Post Momentary Affliction” which are considered classics, world tours and a sound that is constantly being reinvented, Mortification is a band that cannot be put in a box.

Remastered for vinyl and using drummer Jayson Sherlock’s original “lake of fire” cover art, their 1991 classic Self-Titled debut is a must for any fan of thrash or early death metal and any true Mortification fan. Heavily influenced by the thriving thrash scene of the early 90’s, this album is recommended for fans of Vengeance Rising, Kreator and Destruction.

Soundmass originally released Mortification’s debut album on black vinyl (for the first time ever) in 2014, but these copies have long been sold out. In 2020 we did a repress of this album on green vinyl with some improvements to the layout, including colour labels and a spine. However, these copies are almost sold out as well, so 2022 will see another repress of this album, but this time on TRANSPARENT ORANGE VINYL!

TRACK LISTING:
Side A
Until The End
Brutal Warfare
Bathed In Blood
Satan’s Doom
Turn