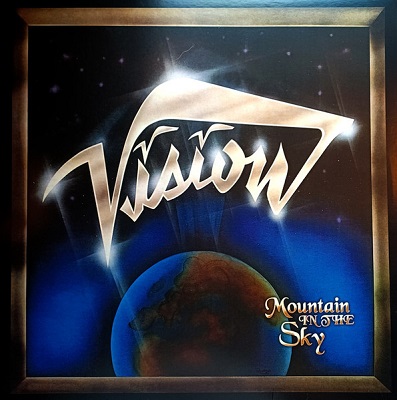 Mountain In The Sky (VINYL)

“Billy Powell (Lynyrd Skynyrd) played with Vision after the band signed with Heartland Records for a sophomore self-titled release in 1985. Five tracks from the debut would be completely re-recorded from the ground up with significant differences in arrangement and production now that they were with a major label. Five other newly penned songs were also recorded, one of which was the anthemic “Standing On The Rock” which Heaven’s Metal Magazine editor Doug Van Pelt would go on to claim was “…one of the absolute best Christian rock songs of the era.” Powell’s keyboards which made Skynyrd’s sound one of the most distinctive in rock and roll history help Vision’s sound resonate with power and authority. Marshall’s crystal-clear rock voice (a la Steve Perry or Dennis DeYoung) brings clarity to a powerful message that continues to inspire and move people today. Vision put together all the necessities of a truly great rock band, combining elements of art rock with solid guitar-driven stadium rock. Marshall and company created a unique sound all their own that still sounds good 25+ years after it was first recorded! With prime riff-rockers from start to finish this album is rock perfection. Steve Holland (Molly Hatchett) is quoted as saying “Vision – I don’t need no stinking Vision. I’m blind as a bat as it is… but this old bat has great hearing! And that’s all you need to know with these guys! Wow!” Beyond the tragedy, the history, the raging guitars and the killer songs, ultimately VISION is about an indomitable will, about survival of spirit, unbowed, uniquely American and stubbornly resolute. Mountain In the Sky was an independent release on Dunamiz Records in 1984. Impossible to find until now – remastered for vinyl, a 12” color insert and heavy-weight vinyl – fans should prepare to lose control! This one has strong progressive overtones! For fans of Kansas, Styx, Mylon LeFevre and Lynyrd Skynyrd!” -Born Twice Records

TRACK LISTING:
Side A
Mountain In The Sky
Coming Soon
Old Man
Dynamos