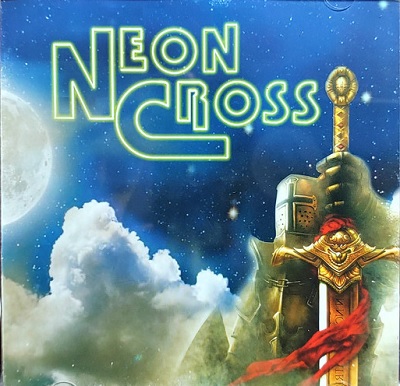 “Neon Cross was a Southern California melodic metal (hair metal) band that rose during the height of the Sunset Strip days. In 1987, Regency Records asked them to record 2 songs for the California Metal Compilation and the 5-song EP Frontline Life demo was released in 1987 as well. In 1988, they released their full-length self-titled album which went down as one of the best Christian rock albums of all time. Girder Records is so proud to be including NEON CROSS as part of our LEGENDS OF ROCK series and offering not only the 10 original songs completely remastered, but also 7 bonus tracks – 2 from California Metal I NEED YOUR LOVE and SON OF GOD as well as the complete 5-song demo FRONTLINE LIFE. Completely remastered in an 8-page jewel case along with photos, lyrics and songs in the right order as found on the vinyl. Yes, the cassette had songs titles in the wrong order on the J-card cover and the Magdallan Records release was missing THE BATTLE from FRONTLINE LIFE. Neon Cross is not just a heavy dose of metal and one of the best classic Christian metal bands from the 80’s, it is also one of the most original bands. When so many bands were trying to sound like a secular mainstream counterpart, Neon Cross stood out and delivered one stunning metal song after another. Starting off with the furious riff in the opening song HEARTBREAKER, it was a serious relief that when these vocals dropped “Used to be so loving. Used to be so kind. Now I can’t get through to you, trying all the time… when you gonna open up and let Him in?” – we knew these guys could write songs with the best of them. They had the chops, the delivery, sound and – yes – even “the look”, standing up to any metal band to come out of Hollywood in the 80’s. Remember when you used to buy an album because you just had to have “that song”, only to find out that the rest of the album wasn’t as good? Well, this album was the exception. Every song rocked. FRONTLINE LIFE, the second song, is a solid rocker with anthem screams and all. WE ARE THE CHILDREN has one of the best guitar intros of the album with speed and toughness. Thank you Don Webster. And those soaring vocals… David Raymond Reeves can shatter your window with those high-pitched screams. You’ll be putting this song on repeat. This album is as much melodic as it is tough driving metal, with punch and delivery rarely found in the Christian metal scene during that time. Now with the addition of the two California Metal tracks as well as the Frontline Life demo, this album is everything you wanted and then some!” -Girder Music

TRACK LISTING:
Heartbreaker
Frontline Life
We Are The Children (Of Our Lord)
On The Rock
I’m Not Alone
Right Time
Run Into The Light
Far Cry (From Eden)
Outta The Way
Victory