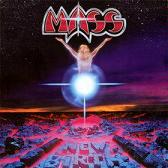 “Originally released on cassette and vinyl in 1985 on RCA Records, this album was nearly impossible to find through the 1990’s up until 2007 when the Nevada based secular metal re-issues label Retrospect Records finally put out a CD re-issue. While legions of fans were thrilled to have this metal classic available on CD for the first time, the 2007 re-issue featured significant packaging and mastering issues that left fans frustrated that it did not reflect the magnificence and perfection of the music on the album. So in 2011 the Iowa based Christian label Retroactive Records has re-issued this heavy metal gem with impeccable packaging faithful to the original vinyl release (6-panel digipak with lyrics and a special message from vocalist Louis St. August). Retroactive and the band also went to great lengths to have the album mastered from the original tapes for the first time ever, opting for the magic of the ten original tracks and leaving off the poorly recorded bonus track from the 2007 reissue. New Birth (Anniversary Remasters Edition) ensures this album has never sounded so clear, so powerful and so pristine giving the re-issue the audio perfection it deserves – for the first time ever. Musically, New Birth is one of the heaviest Mass albums. NoLifeTilMetal music critics describe the album as “…100% heavy metal.” There is a slight pop influence that runs throughout, but it’s more in line with bands like Kiss, Starz or Sweet. Vocalist Louis St. August has a high, soaring vocal style that is perfect for this style of melodic heavy metal. ‘Do You Love Me’ was the single for the album, even getting them some play on MTV. However, it’s the heavier material like the title track ‘Too Far Gone’ and ‘Crying Alone’ that feature smokin’ guitar work, pounding drums and plenty of aggression. The album was produced by Tony Platt who had worked with bands such as Uriah Heep, AC/DC, Motorhead and Iron Maiden, so New Birth is actually produced better than a lot of other lesser known metal bands from the mid-80’s. For fans of Kiss, Quiet Riot, Stryper, Whitecross and Barren Cross!″
-Retroactive Records

TRACK LISTING:
Too Far Gone
Crying Alone
Time
Back To Me
Do You Love Me
New Birth
Left Behind
Voyager (Look For The Edge)
Day Without You
Watch Her Walk