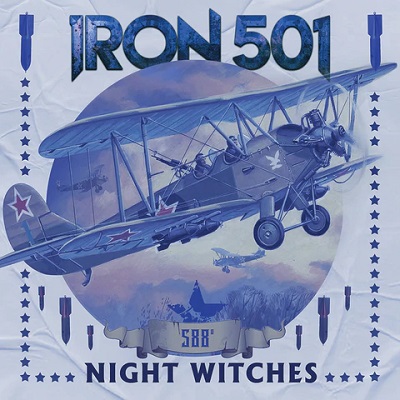 “Roxx Records is excited to be bringing you the second full-length album release from Iron 501. Iron 501 features the vocal talents of Dale Thompson of Bride and is the brainchild of Myles Barfield. If you are unfamiliar with the band Iron 501 this is one that has been a true collaboration of two very talented artists. It has been a very different approach to music for both Dale and Myles. The band wanted to highlight the men and women throughout history who have given everything for their families, communities and countries. Dale spent a lot of time doing research as he poured his heart and soul into these songs, as well as the hard task of choosing which stories to highlight.
Musically, it gave Myles the chance to explore an idea that he had as far back as 1980 something, when he thought of how to pull off a hard rock band with only a bass guitar, drummer and singer and as such you can really hear the heavy bass tones in this release. The only difference or enhancement to that is the addition of a tribal=like percussion section built around the drummer.” -Roxx Records