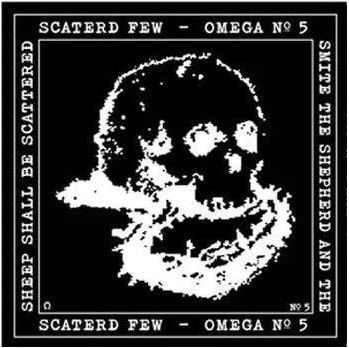 “After going on hiatus from bands and albums for four years, Allan came back in 2002 with his own label Accidental Sirens and two albums. The first of the albums was Omega No. 5, slated as Scaterd Few’s parting shot. Allan imported members from the Dallas band Greyskull to record and tour the album. Bringing in an accomplished guitarist and bassist allowed for a virtuoso return to the uninhibited spirit that made Scaterd Few’s music legendary. After four songs of fast relentless punk, the apocalyptic Rise Up switches gears to tasty hope-filled reggae. Then four more fast and furious cuts sung and slung rapid fire, addressing topics of family, carnality and worldly wealth. Then another reggae number, Tomorrow, chimes in, this time a more traditional variant. This jovial number describes in lush detail the imagery of the afterlife experience of a faithful believer. Such an under-rated song. Sheol, a dark and lurid soundscape, precedes the punk closer of Secret – Secret, a UK-flavoured rampage on the travesty of sleeping with the corruption that will bring about destruction. The Outro on the end is a short segment from Kill The Sarx II (Apocalypse), an appropriate way to sign off on the Scaterd Few legacy. Some have declared Omega No. 5 as Sin Disease Part II. It could be but, without a doubt, it’s fast, it’s furious and it’s brilliant. Just like dancing in the circle pit, ﻿Omega No 5﻿ is a reminder of just how good a punch to the gut and a kick to the face can feel. Limited to just 200 units on vinyl, it’s been remastered by Rob Cowell of Bombworks Sound and comes with a 12″ insert. Play it loudly, but try not to break your neck!” -Retroactive Records

TRACK LISTING:
Run If You Can
Resistance
Fair Is He
This Is
Rise Up
Parental Advisory
Anybody – Everybody
Shark Attack
Camel Crawl
Tomorrow
Only
Sleeper
Life Bleeds Out
Sheol
Secret – Secret
Outro