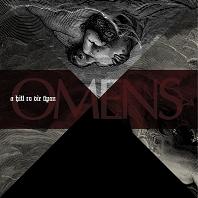 “The band’s sophomore release OMENS was recorded at Girder Mode Studios (engineered by Whitecross guitar hero Rex Carroll) and mixed and mastered in Sweden by Erik Tordsson (Crimson Moonlight fame) giving the album a pedigree of greatness worthy of a band who has consistently won the hearts of critics and fans alike! Their war-metal, anti-blasphemous, Eastern-tinged blackened death metal features Adam’s vocals as hoarse and commanding as ever, like a powerful Old Testament Biblical prophet summoning forth the power of the Almighty; the lyrics a dark but hope-filled testament to the ancient times of humanity and religion. The drums and guitars ebb and flow in a wave of death metal that is not only technical and brutal in its execution, but melodious and alluring. The album showcases the band’s skill, showing us a more mature and able band who has mastered their craft of writing epic song structures, blistering blackened death metal and offering up a juicy slab of technical music that doesn’t sacrifice melody and feeling for sheer brutality. Within a three year period, AHTDU has released two albums that prove black metal does not have to be a parody of itself, but can be powerful and intelligent, as well as pulverizing. If you’re a death metal fan, you need this album as you do water. For those that aren’t too keen on brutal music, you may find OMENS to be quite a treat – give it a shot! Consider yourself forewarned – prepare to be maimed by the infernal horde known as A HILL TO DIE UPON! For fans of Dimmu Borgir, 1349, Behemoth, Vader and Hate!” -Bombworks Records

TRACK LISTING:
Darkness Can Be Felt
The Perfection Of Evil
Adept In Divinity
The Chant Of Mighty Offspring
Heka Primus (Ordo Norma Mysterium)
I Come As Black Fire
Nehushtan
May The Thing Be Destroyed
Satan, Your Kingdom Must Come Down
Ancient Enemy Of Death