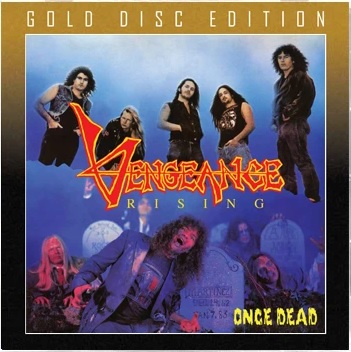 “CD features 12-page booklet with exclusive liner notes and previously unreleased photos and stories about the album cover shoot from Christopher Keene. Vengeance Rising: Once Dead – the sophomore and final album of the original line-up that launched the Christian thrash scene. Completely remastered for gold disc CD. Featuring the original tracks only, just as it was released back in 1990, which is celebrating its 30th anniversary this year. Gold Disc Edition limited to a one-time-only 500 piece pressing”. -Roxx Records

TRACK LISTING:
Warfare
Can’t Get Out
Cut Into Pieces
Frontal Lobotomy
Herod’s Violent Death
The Whipping Post
Arise
Space Truckin’
Out Of The Will
The Wrath To Come
Into The Abyss
Among The Dead
Interruption