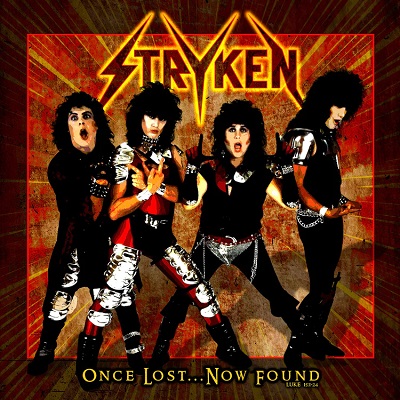 “Up to this point, all of STRYKEN’s previously recorded material had been released under the band name STRYKER. This includes their single in 1980, 4-song EP/demo in 1981 and “Blitzkrieg” album in 1983. In 1986, they changed their name to STRYKEN, released their 2-song single titled Rock On/Suprise and went on to add bass player Ezekiel Vade. In 1987 they launched their 8-song First Strike album and were one of the featured bands on K-Tel’s “Righteous Metal” album with notable bands like Petra, Barren Cross, Bloodgood and Philadelphia. STRYKEN – Once Lost Now Found includes 14 songs with 7 new releases and 4 new songs that were once lost but now found! Never released songs like “A Man”, “Momma” and the up-tempo, bass guitar centric version of “I Need Your Love” which begins with a killer synthesizer intro. Additionally, 3 live audio recordings now found enhance the album with one track that covers the band member introductions and the band’s message regarding the gospel of Jesus Christ. The album closes with “I’ll Be Home”, which Dale Streiker wrote for his daughter when she was very young and recorded as a wedding gift for her. It is remastered for vinyl by Bombworks Sound and includes a deluxe full-colour insert with lyrics and band pics, plus a full write-up from Doug Van Pelt of Heaven’s Metal Magazine” -Retroactive Records

First time ever on vinyl and limited to 200 units.

TRACK LISTING:
Side A
A Man
I Need Your Love (Extended Version)
Rock On (Extended)
The Answer
One Way
Momma
Stryken Show Intro (Live)