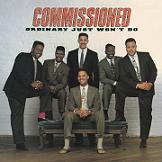 “There is certainly nothing ordinary about Commissioned. As pioneers in contemporary gospel music, and way ahead of their time, the 6-man Detroit-based group soared high on Ordinary Just Won’t Do. First released in 1989, the album reached #4 on Billboard. Propelled by strong song-writing, gloriously sweet harmonic jams and a street-edge, Commissioned simply nailed it for thousands upon thousands of youth across the country. With the vocals of Fred Hammond, Keith Staten, Karl Reid and Mitchell Jones paving the way and supported by instrumental genius of Michael Brooks and Michael Williams, the group spread the gospel with a sound that remains unparalleled. This 20th Anniversary Edition re-issue comes packaged in a full color digipak with enhanced original artwork and is properly remastered for a high quality audio experience! Stan North, Managing Editor of GOSPELflava.com contributes liner notes exclusive to this release.″ -Retroactive Records

TRACK LISTING:
Back In The Saddle
Ordinary Just Won’t Do
If My People
Heart Of Mine
A Life That Shows
No More Loneliness
There’s No Excuse
It Was You
Here I Am (More Than A Conqueror)
There’s No Excuse (Reprise)