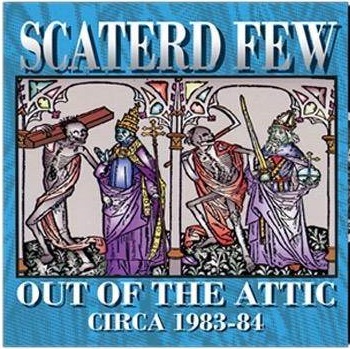 Out Of The Attic (VINYL) (pre-order)

“Out Of The Attic was “officially” released in cassette format in 1991 on Aguirre’s own Sacrosantus label, a year after Sin Disease was released. Before that, an 11-song tape was made available at shows or bootlegged. Flying Tart Records picked it up for a CD release in 1994. Out Of The Attic finally receives the sound tweaking it has been begging for. Tracks 4 through 11 off Out Of The Attic were on The Terry Tapes, named accordingly since Terry Taylor sat in the producer’s seat. Attic is unapologetic LA punk; no special effects, no over-dubs. The audacity of believers doing punk in the early ‘80s is unequivocally ballsy. These were short, yet authentic, punk songs informing a decade and a half of starch-in-the-collar industry types what they could expect, particularly in the Pacific Northwest, for another musical revolution. Apart from the first Barnabas album, Circle One, a young U2 and some fringe UK bands, nothing came close to the fire Scaterd Few was igniting. And nothing came within a country mile of the punk vibe of these primal songs. The 2023 Retroactive Records black vinyl has been remastered by Rob Colwell of Bombworks Sound and also includes 2 never before released tracks from The Aspects – Allan’s band in Guatemala City circa 1981! Never before on vinyl and limited to just 200 units worldwide! Enjoy!” -Retroactive Records

Bonus Tracks: The Aspects
With Him
Knock Knock