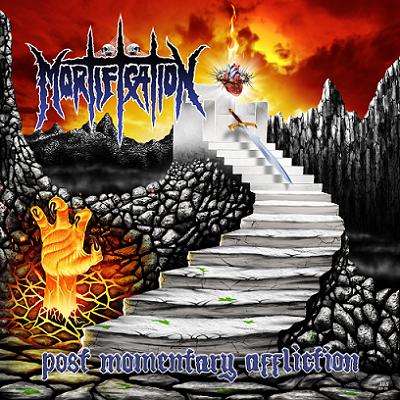 As the 300 black vinyl from 2017 had sold out, we intended to release 300 copies of “Post Momentary Affliction” on orange vinyl in 2021. HOWEVER, WHEN WE RECEIVED THEM FROM THE MANUFACTURER THEY HAD UNFORTUNATELY PRESSED THEM ON BLACK VINYL AGAIN, SO THAT IS WHAT WE ARE SELLING.

After the pounding death/grind of 1992’s “Scrolls of the Megilloth”, “Post Momentary Affliction” sees Mortification returning to their thrash roots in 1993, but with a refinement and creativity which would see this recording considered a classic. With the influences of Manowar and Iron Maiden on display, we’re treated to a feast of incredible thrash and speed metal that is laced with death metal. Complex songwriting, precise riffing, masterful bass playing, phenomenal drumming, intelligent lyrics performed in a fresh death growl/thrash shout style, all captured with clear and clean production. Recognised by many critics as an innovative album, and arguably seeing this trio crafting songs at their artistic peak, “Post Momentary Affliction” is distinctly Mortification and showcases everything fans love about this band.

Remastered for vinyl and with the original cover art re-created from scratch by drummer Jayson Sherlock, this vinyl edition is a must for fans of this pioneering Aussie band and any true metal aficionado. Included is an insert containing lyrics, credits and photos.