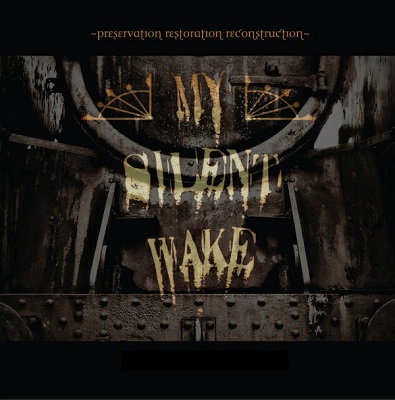 “It took the band over 2 years to create this acoustic masterpiece. Mixing was done at The Cage in Coventry which is run by Martin Bowes of Attrition. The album features the talents of seven musicians and the instrumentation includes dulcimer, bass, guitar, recorder, harmonium, keys, drums, many percussion instruments, violin and cello. There are 13 new songs including a remake of “Shadow Reprise.” You will hear melancholic folk, medieval flavored instrumentals and songs which are from the heart and born from personal experiences. With the release of 2007’s iconic 2 CD ‘Anatomy Of Melancholy’ the band explored full-on doom metal paired with a second disc of medieval doom/folk of the highest caliber. Instead of another release featuring two styles, My Silent Wake is simultaneously releasing one album of metal (Silver Under Midnight) and one album of acoustic folk/doom (Preservation Restoration Reconstruction). If you are a fan of bands like Holy Blood, Paradise Lost, Leonard Cohen, Dead Can Dance, Of The Wand And The Moon and My Dying Bride this release is an essential purchase!″ -Bombworks Records

TRACK LISTING:
Midnight
My Sorrow Is Yours
Who Am I
OHM (Ritual)
Dont Turn Away
NDE
Child Of Light
Another Day
From My Window
When You Leave
In Remembrance
Last Song To You
Light And Shadows