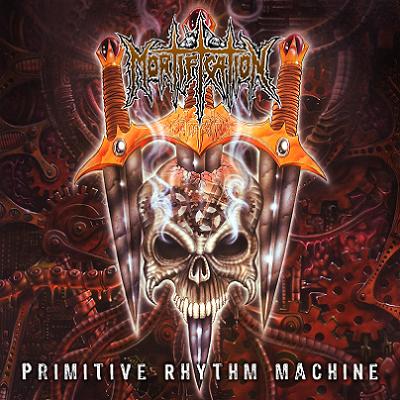 Mortification’s 5th studio album is an anomaly of sorts, with no permanent band members except for founder Steve Rowe. Instead he records with his Blood World touring band, plus guitarist George Ochoa (Deliverance/Recon/Worldview), who also produced the album. This was also their last album released on Intense Records.

Primitive Rhythm Machine continues where Blood World left off – successfully fusing thrash metal with groove and classic metal influences. However, in line with Mortification’s ever evolving experiment in sound, the production is more raw than its predecessor and, true to the album title, there is a spotlight on the drumming, giving it a Sepultura vibe. The musicianship is innovative and outstanding, providing us with a great album of classic Mortification songs.

Remastered and with Troy Dunmire’s original cover artwork in its full glory, this 2020 jewel case version of Primitive Rhythm Machine includes 3 bonus tracks and an all-new layout – a 12-page booklet with lyrics, photos, articles and an album history written by Scott Waters (Ultimatum/NoLifeTilMetal). This edition is a must for fans of this pioneering Aussie band and any true thrash enthusiast.