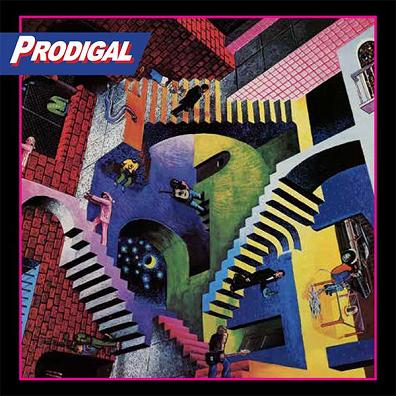 “Based in Cincinnati, Prodigal was fully in tune with the sounds and spirit of the late 70’s and 80’s with the self-titled release of their 1982 debut album on Heartland Records. Fronted by keyboard wiz Loyd Boldman, Prodigal took their cues from technology driven bands like Styx and DeGarmo & Key (especially the early years), but also showed influences from artists like Steely Dan, Ambrosia, Sweet Comfort Band and Atlanta Rhythm Section. The album cover is notable for mimicking M.C. Escher’s Relativity, but featuring imagery inspired by each of the song titles. Pop, funk and bombastic rock music with unbelievable hooks and thought-filled lyrics that flew firmly in the face of the normal CCM fodder we were used to choking down. Where other artist bemoaned the struggles, pain and realities of life on this spinning globe, Prodigal placed themselves within that reality and expressed those struggles from one who is intimately aware and experienced with those struggles. The opening track “Invisible Man” speaks on behalf of forgotten people, rejected by society. “I Don’t Know Who You Are” is a standout track featuring the thoughts of a bewildered seeker. “Sleepwalker” focuses on pleasure seekers who go through life without acknowledging their need for something more substantial. With Prodigal you get essential ear candy that touches the heart and soul. In fact, this album struck such a chord with both critics and fans that Prodigal’s self-titled debut album was named Album Of The Year in 1982 by Group Magazine (along with Amy Grant’s Age To Age and Petra’s More Power To Ya). Long overdue for a re-issue, this is the first time the self-titled 1982 album is digitally remastered as an individual CD release. The 2018 Retroactive Records re-issue features the original album in all it’s brilliance, plus four exclusive bonus tracks. Part of the Legends Remastered Series this special release is packaged in a jewel case with a 12-panel booklet with lyrics and band photos. You also get 4 exclusive bonus tracks! Get this essential CD or splurge for all 3 Prodigal CDs (and the Loyd Boldman 1988 solo CD Sleep Without Dreams) while you can!” -Roxx Records

TRACK LISTING:
Invisible Man
Easy Street
Fire with Fire
Sleepwalker
Want You Back Again
I Don’t Know Who You Are
Need Somebody to Love
Busy Man
Hard Bargain
Sidewinder