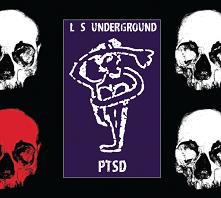 “Michael Knott has recorded a new L.S.Underground including Joshua Lory (Lifesavers), Brian Doidge, Jim Chaffin (The Crucified, The Blamed) and Casey Prestwood (Hot Rod Circuit). It has been in Knott’s heart to create an album that would bring awareness to the overwhelming difficulties that U.S. and allied troops encounter upon returning from combat, especially Post-Traumatic Stress Disorder. PTSD, the leading cause for homelessness as well as alcohol and drug abuse among veterans, is a psychological and neurological disorder. This is heavy subject matter that needs to be brought to the surface in order to honor and help those who have served our country. The weighty issues surrounding PTSD are pulled to the front line by the heaviestL.S.Underground album to date. After recording over 15 albums, Michael claims PTSD is the most important record he has done since This Is The Healing. Most of the songs address the difficult re-entry issues of American veterans returning from war. “Child’s Play” is the prayer of a child for his Dad, while “Miss America” addresses thedifficult memories of a medic on the front lines. Of the long journey back to wholeness, “Souls Are So Low” and “The Hallows” express that haunted sense of being in two places at once – here trying to assimilate to life as normal and still in one’s mind experiencing “Lights Out” in Baghdad. Veterans live with the fear one is “NeverGonna Come Back” – at least not completely. 10% percentage of the sales of this crucial release will go PTSD awareness. Packaged in a four-panel digipak, this 2012 Retroactive Records release has been digitally mastered by J Powell of Steinhaus for maximum sound capacity. For fans of the heavy, dark, aggressive rock bands likeTool, Pearl Jam, Nirvana, Jane’s Addiction, Iggy Pop, David Bowie and Public Image Ltd.″ -Retroactive Records

TRACK LISTING:
Acclimation
Souls Are So Low
The Hallows
My Redemption
Child’s Prayer
Miss America
A Shade Of Pain
Lights Out
Never Gonna Come Back
Forever
What Is Love Fighting For