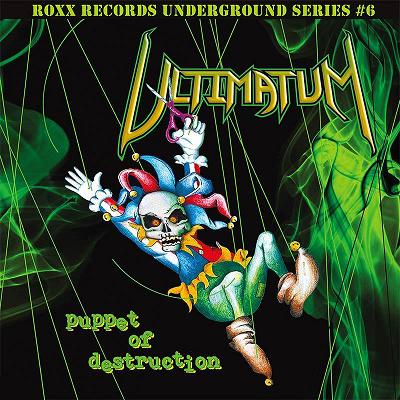 “Roxx Records is very pleased to announce the next in our limited edition vinyl series called the Roxx Underground Series. We are also very pleased to announce that with this release we are also celebrating the 20th anniversary of a very special title for this, our 6th release in the series. Please join us as we celebrate the 20th anniversary of this seminal underground Christian thrash album entitled Puppet Of Destruction! Yes, that’s right, we are proudly releasing a limited edition vinyl pressing of the classic album from Ultimatum which is actually the band’s second full-length studio release. Originally recorded in 1997 and released in 1998 via Rowe Productions, the album was well received but the band was never quite happy with that original releases master and mix. So Roxx Records would go on to remaster and re-issue Puppet Of Destruction on CD to celebrate the 15th anniversary of the release. Now, as we approach the 20th anniversary of this album, Roxx has spared no expense making this release extra special for the fans and the band as we celebrate Ultimatum and their Puppet Of Destruction with its first ever VINYL release! This limited edition pressing of only 150 hand numbered copies is on a very cool green and black swirl vinyl, with full-color center rings. The artwork was re-imagined and re-worked by vocalist Scott Waters.” -Roxx Records