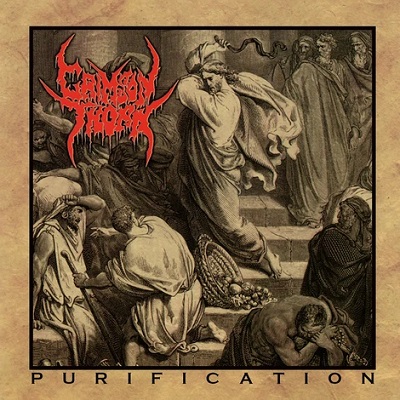 “Crimson Thorn is one of the most technical and pummeling death metal bands ever! They stand toe-to-toe with bands like Obituary, Carcass and Cannibal Corpse. Crimson Thorn is one of the few Christian death metal bands that could ever be put in such an elite category. The vocals are low and ultra-gutteral. One album literally included a liner note warning that no effects were used on the vocals! From beginning to end the blastbeat double-bass assaults, gutteral growls and general death metal fury never lets up. Fans can once again discover the delight and joy of the deep, distressing and downright disturbing sounds of Crimson Thorn!” -Bombworks Records

Remaster by Rob Colwell of Bombworks Sound. Comes in an 8-panel jewel case with lyrics and rare band pics. For fans of Suffocation, Autopsy, Death and Cannibal Corpse.