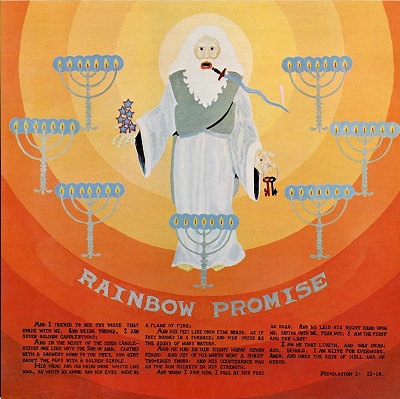 “One of THE top Christian psychedelic rarities is this custom guitar-based rock monster from the 5-man band Rainbow Promise with strong west coast vibes that recall the best of Wilson McKinley! The stage is set right from the start with the righteous rocker “Get Ready,” featuring mouth-dropped-to-the-floor sharp dual guitar leads (reminds us of “Paint It Black” by The Rolling Stones!). “Someone You Need” follows with some of the most insane scorching echoed wah-wah guitar on record anywhere and “Do You Hear” starts off fast, then adjusts to a moodier feel on par with much of what is on the Christian psych legendary album “Spirit Of Elijah” by Wilson McKinley. The same can be said for both “Prophecy” and “Rebirth”, with the later treating listeners to inspired echoed guitar leads. Track eight is an electrified cover of one of the most iconic Jesus Music tracks of the 70’s – “Little Country Church” – made popular by Love Song. It’s hard to top all this greatness! The band even breaks open a fresh can of pure charm with the delightful country rocker “Romans 8-28” and the laid back campy “The Joy Of The Lord.” The album features dynamic drumming and not a single keyboard note to be found anywhere! The homemade cover art is psychedelic perfection with a depiction of the glorified Son of Man in the midst of seven candlesticks as presented in Revelation 1:12-18. Guitarist and primary song writer Steve Powell (R.I.P. 2021) also has a 1974 solo album Revelation (The Party’s Over) which is also available on CD and vinyl. CDs come packaged in an 8-panel insert and have been remastered to perfection. For fans of Exkursions, Wilson McKinley, The Doors, Rolling Stones, Cream, Iron Butterfly, early Resurrection Band, All Saved Freak Band, Agape and JC Power Outlet! If you like massive, haunting rock music and a scorching guitar onslaught, then this is for you!” -Retroactive Records

TRACK LISTING:
Get Ready
Someone You Need
Do You Hear
Romans 8-28
The Joy Of The Lord
I’ve Got The Rebirth
Prophecy
Little Country Church
Please Don’t Refuse Him