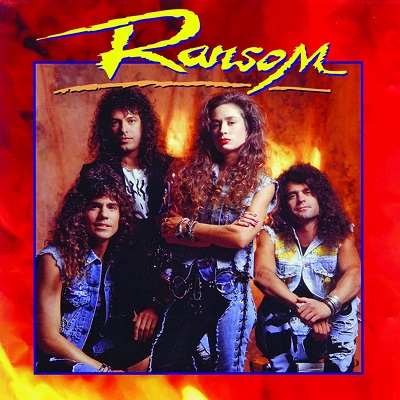 “Ransom can trace its history to the mid-eighties and the burgeoning white metal scene that originated following the commercial success of Stryper. Yes, a well known player in what was a literal flood of Christian metal bands at the time, but what set Ransom apart is that it was one of the few to be fronted by a female vocalist. Initially getting its start under the name First Aid, the group formed when bassist Michael Ciado and vocalist Lisa Faxon met through an ad placed in a Los Angeles area music paper. The change to the Ransom moniker did not come about until prior to the recording of a 3-song demo entitled Once And For All and placing the track “Sin Killer” on the California Metal II (1988) compilation. The resulting notoriety helped lead to Ransom later signing with Intense Records. The group’s 1991 self-titled Intense debut brings a joining of commercial metal and hard rock that fans of Crystavox, Shout, Stryper, Guardian, Angelica and Holy Soldier will be certain to appreciate. Female-fronted groups of the time such as Arsenal, Scarlet Red and Rosanna’s Raiders also deserve consideration. There are two things that stand out about Ransom: 1) the group’s all around heaviness and 2) creativity of its better material. Both factors play a key role in top of the lines pieces “Lasting Love”, “Break Into Darkness” and “Fallen Angel”. If it is muscle you are looking for then check out the double-kick drum action on “Break Into Darkness” or the rhythm guitar assaults of “Lasting Love”. “Fallen Angel” in particular is a special piece with its variances in time and tempo and exquisite chorus. These three are as good as it gets and represent the pinnacle of Ransom’s songwriting abilities. The expanded 12-page jewel case release includes lyrics and rare band photos. The visual graphic design layout is light years better than both the original issue and the 2011 Intense Millennium CD releases and now both of those are long out-of-print! The 2021 remaster that includes four bonus tracks is nothing short of exquisite and make this an essential must-buy re-issue of a bonafide Christian AOR/metal classic!.” -Retroactive Records

TRACK LISTING:
Lasting Love
Rumors
Memories Of You
Fool That I Am
Break Into Darkness
Tonight
Etched In Stone
Fallen Angel
Your Broken Heart
I’ll Never Leave You
When I Die