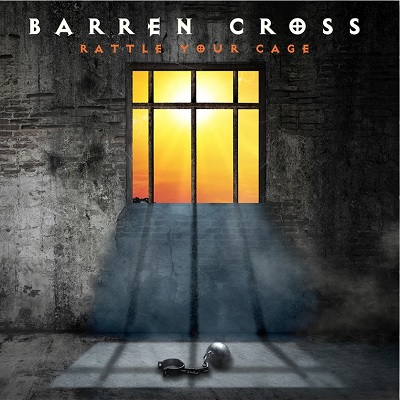 “Released in 1994, this album got sandwiched between trendy grunge rock and alternative hipsters that thought metal was a dirty word. Metal bands were having the life sucked out of them. Hair-band was a derogatory term and stars of the LA Strip scene were treated like an embarrassing drunk uncle. Despite the anti-metal sentiments, Barren Cross defied all odds and put out an epic classic metal/hard rock album on Rugged Records. That label folded and the album went out-of-print almost as soon as it was released. While their 80’s albums were more polished power metal meets LA glam, Rattle Your Cage has a production that is somewhat raw and stripped down. It’s special to hear the band ripping full-throttle bluesy hard rock with an ever so slight 70’s throw-back sound reminiscent of Die Happy and Badlands. Though a couple tracks here sound like they could have easily fit on the State Of Control era format, expect classic American-styled hard rock featuring one AOR anthem after another. Fully remastered by Bombworks Sound for CD and vinyl, these deluxe re-issue are vastly improved with all new artwork by Scott Waters of NoLifeTilMetal. For fans of Great White, Cinderella, Giant, Black Stone Cherry, Kiss and especially Guns N’ Roses!” -Retroactive Records

TRACK LISTING:
Rattle Your Cage
Here I Am
Unsuspecting
No Time To Run
Sick
Somewhere Far Away
Feed The Fire
Let It Go Let It Die
Time For Love
J.R.M.
Your Will
Midnight Son