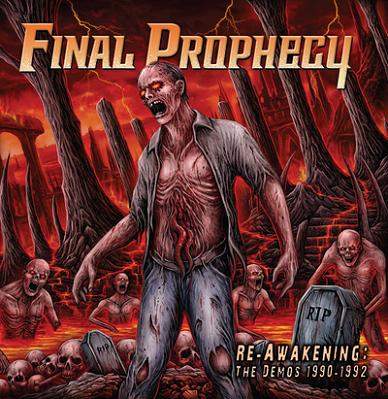 “Roxx Records is excited to announce another killer Christian thrash release to melt your ears off! Welcome to the fold Florida’s very own FINAL PROPHECY. FINAL PROPHECY was formed in April of 1990 by former Thanatos (US)/Therion (US) guitarist Eric Hoffman in West Palm Beach, Florida, along with drummer James Silvestri, as a five-piece. Rounding out the early line-up was bassist Kyle McKelvey, guitarist Pat Flynn (now a classical music professor at Bob Jones University) and vocalist Tim Williams. By August of that same year the band ended up as a trio with new bassist Nick Varhola entering the fold. As a trio, FINAL PROPHECY would record and release two studio demos, “HE SET THE CAPTIVES FREE” (1990) and “RUDE AWAKENING” (1991), as well as having played with such acts as Dauphin (formerly Revelation), Royal Anguish, Prophecy, Demented Jester, Fatal Sin and Torn Flesh. After the release of their sophomore effort both James and Nick left to pursue other opportunities. Though officially put to rest, one last FINAL PROPHECY demo was recorded for a planned 7″ release on the A.R.T Records label (“THROUGH EYES OF FIRE”, 1992). This session would go unreleased… until now. We are very happy to announce FINAL PROPHECY ‘RE-AWAKENING: THE DEMOS 1990 – 1992’ on our limited edition Roxx Underground Series, coming in at #9 in the series and limited to only 150 hand-numbered copies on black vinyl.” -Roxx Records

TRACK LISTING:
Side A
We Must Die
Divided In Truth
Where Pain Never Dwells
Rude Awakening

Side B
Burn
Product Of Society
Through Eyes Of Fire
Satan