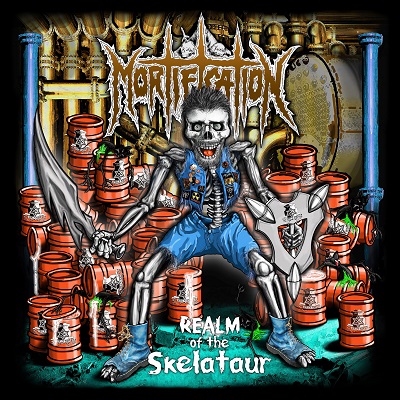 With releases on label giants like Nuclear Blast and Metal Blade, albums like “Scrolls Of The Megilloth” and “Post Momentary Affliction” which are considered classics, world tours and a sound that is constantly being reinvented, Mortification is a band that cannot be put in box. Many years and many albums came to pass… until 2015 and Mortification’s 16th – and probably last – studio album “Realm Of The Skelataur”, where the band continued to experiment with different sounds and styles. This was high energy thrash blended with the death metal Mortification is known for, along with a touch of doom, classic metal and NWOBHM. It’s an interesting mix of their early albums – extremely fast, slow and complex – played with the incredible musicianship you would expect from such metal veterans. There’s basically something here for fans of any Mortification era to enjoy, with Steve belting out the lyrics in his usual half-growled style (though he does throw in some more guttural vocals for good measure!)

With the original digipak version all but sold out, Soundmass are happy to be re-issuing “Realm Of The Skelataur” in 2022 to keep this album, and the Mortification legacy, alive. This version comes in a jewel case with a 12-page booklet and all new layout, courtesy of Scott Waters (Ultimatum/NoLifeTilMetal). And if that wasn’t enough, we have made this a 2-CD edition with the 2nd disc – “Live 2015” – being Mortification’s entire 25th Anniversary Concert at Easterfest. It is 21 tracks of raw Mortification glory, with plenty of classics thrown in along with Steve’s trademark storytelling. So order this re-issue and you’ll soon be screaming along with Steve “Let me hear some noise!”