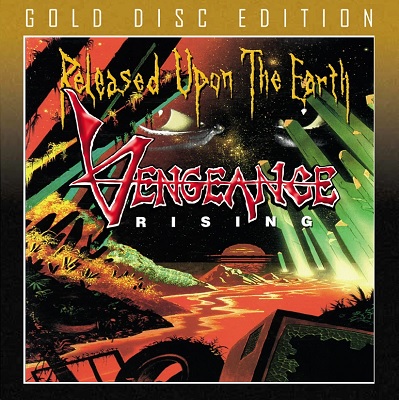 “Our first re-issue for 2021 comes by way of the 4th and final studio album from Vengeance Rising entitled Released Upon The Earth. This special release is limited to only a one-time 300 piece pressing as a part of the Roxx Records Gold Disc series. This is only the second time this album has been re-issued on CD. Outside of the original pressings, there was also a limited pressing in 2015 by Intense Millennium Records which has been out-of-print and hard to find since. This edition was completely remastered by Rob Colwell of Bombworks Sound, with the layout and design by Scott Waters of NoLifeTilMetal Graphics.” -Roxx Records

TRACK LISTING:
Help Me
The Damnation Of Judas And The Salvation Of The Thief
Released Upon The Earth
Human Dark Potential
Instruments Of Death
Lest You Be Judged
Out Of Bounds
Bishop Of Souls
Tion
You Will Be Hated