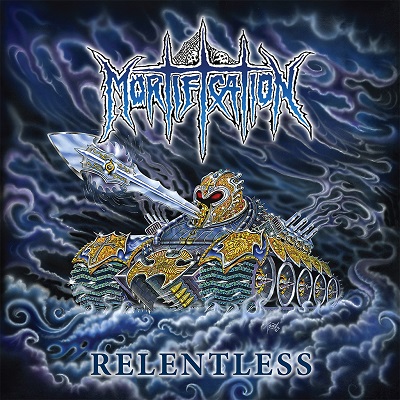 Continuing with our chronological release of Mortification albums on VINYL, Soundmass are happy to announce the LP release of Relentless.

Relentless (2002), their 10th studio recording, saw the inclusion of Canadian guitarist Jeff Lewis. New blood seems to have kickstarted this old metal machine as Mortification produced some of their best, and heaviest, material in a while. Most of the songs are a fantastic hybrid of thrash, power and speed metal, as exhibited in classic cuts like ‘Web Of Fire’, ‘God Shape Void’ and ‘Bring Release’. However, they even touch on doom and death metal (‘Apocalyptic Terror’), giving us the feel of both early 90’s and newer Mortification. The guitar work shreds and the rhythm section just annihilates. The structurally diverse riffs are heavy, yet catchy and melodic – Mortification definitely had their groove back.

19 years since its initial release, this is the first time Relentless has ever been available on vinyl. Remastered for vinyl and with Troy Dunmire’s original cover artwork in full-sized splendour, this edition – a limited pressing of 250 copies on black vinyl – is a must for fans of this pioneering Aussie band and any true metal enthusiast.