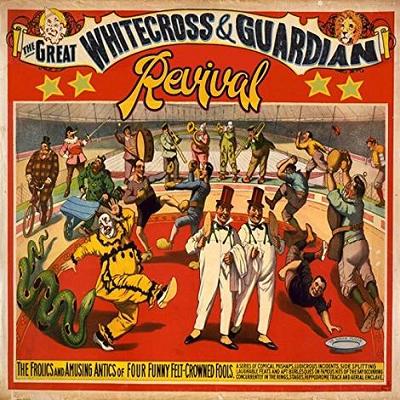 “Whether you call it white metal or Christian rock, the names WHITECROSS and GUARDIAN are well known among fans of those circles, having sold about a million records and completed many worldwide tours between the bands in their heyday. While both groups reached their zenith in the ’90s, 2017 brought about a revival of sorts as core members of both bands have formed a new lineup that will record and tour on some of the classic songs from each band. Although GUARDIAN and WHITECROSS have continued to record and play live on occasion in recent years, this new formation of WHITECROSS + GUARDIAN happened almost by accident. “I have known Jamie Rowe (vocalist) and David Bach (bassist) from GUARDIAN for years,” explains Michael Feighan, longtime WHITECROSS drummer. “Rex Carroll (founding WHITECROSS guitarist) and I were the guys in WHITECROSS who liked touring the most. We got an offer for some Latin American dates with GUARDIAN and we found out that Jamie and David were the road dogs in GUARDIAN, so it made sense that we should put a ‘supergroup’ together!” adds Feighan with a chuckle. “It made total sense to David Bach and myself,” says Rowe. “Why not put one group together with the guys from both bands who love to play live the most? We think both GUARDIAN and WHITECROSS fans might really enjoy that — both live and in the studio.” “Michael Feighan and I joke a lot among ourselves,” adds Bach. “We’re totally aware that what the fans really want to hear is Jamie singing WHITECROSS and Rex playing GUARDIAN. But Mike and I will also bring our own unique thunder to the party!” With Rex Carroll as arguably one of the finest guitar gunslingers in Christendom and Jamie Rowe as one of the classic rock belters in hard rock music, this is indeed a project worth checking out. The energized lineup of GUARDIAN + WHITECROSS entered the studio with Rex Carroll at the production helm to record seven tracks for the album titled “Revival”, which features new recordings of WHITECROSS and GUARDIAN classics, as well as a few surprises including a Jimi Hendrix cover song. The results are stunning with the album sounding like it was produced with a high dollar budget. Unmistakable classic Guardian plus classic Whitecross sounding better than ever. For clarity, Jamie Rowe adds, “Neither the classic lineups of GUARDIAN or WHITECROSS have officially broken up. We’re just having fun with this unique pairing. GUARDIAN + WHITECROSS is its own thing. Don’t miss it! Only 300 red vinyl records were pressed. This is a one-time pressing – with no more units ever to be made. Get them while you can before they are commanding collector prices! With seven tracks and 40 minutes of high octane metal, you can’t go wrong!”

TRACK LISTING:
Side A
Enough Is Enough
The Rain
Never Say Goodbye