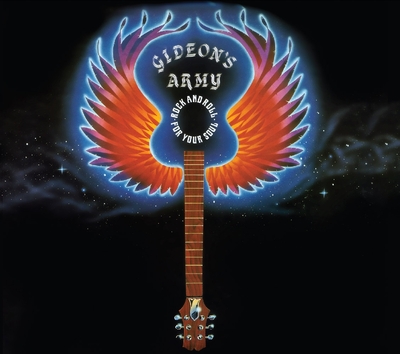 Rock And Roll For Your Soul (re-issue)

“Gideon’s Army was born in 1973 during the early years of CCM. Hailing from the San Francisco Bay Area, the band worked to support the prison ministry that is now known as Follow Up Ministries. Gideon’s Army worked closely with juvenile halls, the CA Youth Authority and CA State and Federal prisons. Their sound started out as acoustic, laid-back gospel similar to the Maranatha! bands out of L.A. Before long, the band would morph into a full-fledged aggressive Christian rock act. The change was better suited for their outreach which included street ministry (Jews For Jesus, S.O.S. San Francisco), Christian coffee houses and concert ministry (Great America, Oakland Civic Auditorium, H.P. Pavillian San Jose) among many other ministry opportunities. It wasn’t until 1982 that the band recorded and independently released “Rock And Roll For Your Soul”. The debut record reflected what was happening in the S.F.B.A. music scene at the time – dual lead guitars, horns and an R&B feeling. The 1986 release of the now iconic “Warriors Of Love” brought big changes both in personnel and sound. Gone were the horns, dual guitar leads and, most notably, there was a more aggressive rock format. The new sound stood shoulder-to-shoulder with bands like Van Halen, Night Ranger, Petra and .38 Special. The album sold like crazy at shows, but with no formal distribution many people never got their hands on the now high-dollar collectible vinyl of this legendary classic rock release. Retroactive Records has remastered this essential 1982 AOR album and it is now available in digital format for the first time ever. The 2015 re-issue is a four-panel full-color digipak and is part of the Legends Remastered Series.” -Retroactive Records

TRACK LISTING:
Light
Dream
Lift Your Heart
What Is Love
Better Days
On The Move
New Man
Can You Still Turn Away?