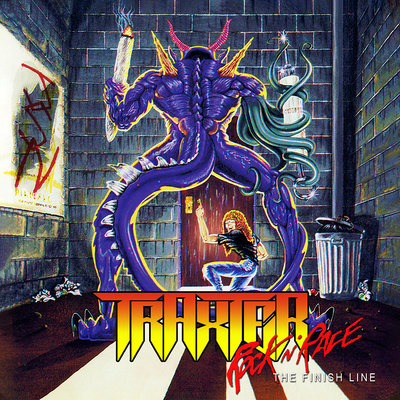 “Roxx Records is very excited to announce the release details of another classic Christian metal title that had been eluding us for years! We are extremely excited to be bringing you another cool re-issue of an album that was originally released in 1991 and is impossible to find today. Hailing from Bakersfield, California, we welcome the band TRAXTER to the Roxx Records line-up! Their one and only album ‘Rock N’ Race’ was a classic in the Christian metal underground and has been nearly impossible to find. Well, it’s time we fix that and bring this one back out to the public. When working with the band on bonus tracks for this one we learned they had never recorded any other tracks outside of ‘Rock N’ Race’, but they did manage to play a new song live that was never properly recorded and we are excited to include that as a bonus track here for all to hear. The track is called ‘Lovin’ Star’ and was intended for the next TRAXTER release that never came to be, but luckily we found a decent live recording of this previously unreleased track and have added it here to complete this TRAXTER collection. All TRAXTER ‘Rock N’ Race – The Finish Line’ tracks have been remastered by Rob Colwell of Bombworks Sound and updated cover art, design and layout are courtesy of Scott Waters of No Life Til Metal Graphics. This will be a one-time special pressing of only 500 copies.” -Roxx Records