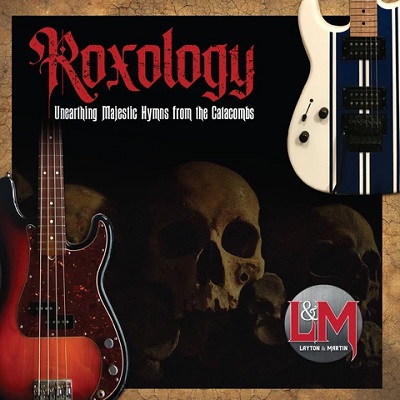 “Roxx Records is very honored to be a part of this one and working with these two amazing artists – Nick Layton (FireWolfe, Q5) and Roger Dale Martin (Vengeance Rising, Die Happy) – in conjunction with Sanctuary International. Going under the name Layton & Martin (L&M), this debut album is an instrumental masterpiece combining some of the most classic hymns and amazing rock music to create “Roxology (Unearthing Majestic Hymns From The Catacombs)”. The Layton & Martin “Roxology” album is the culmination of years of work that began with one song – Deep Deep Love Of Jesus. After that song was recorded, a vision began to develop for a full album of classic instrumental hymns. In the 21st century, the hymns are largely ignored, as well as their deep and rich content, relegating them to the catacombs of music history. Beyond that, many people who have a great connection to hard rock and heavy metal music have not been introduced to these masterpieces of musical expression. Thus – Roxology. Ten amazingly arranged and performed classic hymns that not only Rox your ears, but your soul as well. This album includes the lyrics to each song and are provided so the listener can spend time meditating on the great Biblical truths declared by the original hymn writers. This music will enrich you in your pursuit of a deeper and richer worship of our majestic God. As stated by the 19th century English pastor J.C. Ryle: “Good hymns are an immense blessing to the church. They train people for heaven, where praise is one of the principal occupations.”” -Roxx Records

TRACK LISTING:
A Mighty Fortress
How Great Thou Art
O Holy Night
Deep Deep Love
Nothing But The Blood
Old Rugged Cross
They’ll Know We Are Christians
It Is Well
Holy Holy Holy
I’ll Fly Away