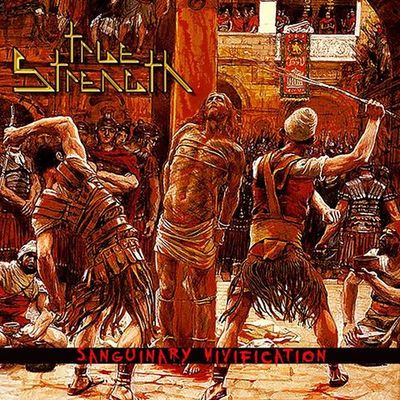 “TRUE STRENGTH is honored to announce that their third full-length studio album, Sanguinary Vivification, will be released on CD format through Roxx Records. Fans of bands like Sacred Warrior, HammerFall, Warlord, Iron Maiden, Bloodgood, Bride, Journey, Megadeth, Queensrÿche, Deep Purple, Kamelot, Sabaton, Thin Lizzy and Rhapsody Of Fire will absolutely love TRUE STRENGTH’s new release! The album features the renowned American power metal vocalist George Tsalikis of Zandelle in addition to songwriter, rhythm guitarist and bass guitarist Ryan ‘The Archangel’ Darnell, lead guitarist Josh Cirbo and drummer Ryan Mey. In late 2017, True Strength went into the studio to record their third album Sanguinary Vivification and, as with Steel Evangelist, they elected to work with Robert Sands on the recording of the album. Darnell recorded the rhythm guitar, bass, acoustic guitar and piano in three sessions. Josh Cirbo finished the lead guitar tracks after a year into the project and Ryan Mey completed the drum parts and both were sent to Sands to be added to the tracks. After being dissatisfied with his vocal performance on Steel Evangelist, Darnell took a more patient approach and decided to hire a long-term vocalist for True Strength. During a single year, he went through 6 different vocalists, with scheduling issues being the main reason for them being unable to perform on the album. Finally, Darnell’s friend and former True Strength drummer Chris Clark was able to get him in touch with Zandelle’s vocalist George Tsalikis who Darnell was a big fan of since late 1990/early 2000. Immediately, Darnell hired Tsalikis and he completed the vocals for Sanguinary Vivification in January 2019. The album is the first theme album that True Strength has attempted. Each song seeks to show the parallel between the prophecy of the suffering servant in the book of Isaiah and the life and passion of Jesus Christ and how he and he alone fulfilled the prophecy written nearly 700 years before his birth. The lyrics for each song derive from actual scripture in the Books of Isaiah, the gospels of Matthew, Mark, Luke and John, as well as the book of Revelation.” -Roxx Records

TRACK LISTING:
Immanuel
Man Of Sorrows
Silent Before The Shearers
His Blood Is On Us
The Punishment That Brought Us Peace
By His Wounds We Are Healed
A Grave Among The Rich And The Wicked
Arisen Is The Suffering Servant
Worthy Is The Lamb