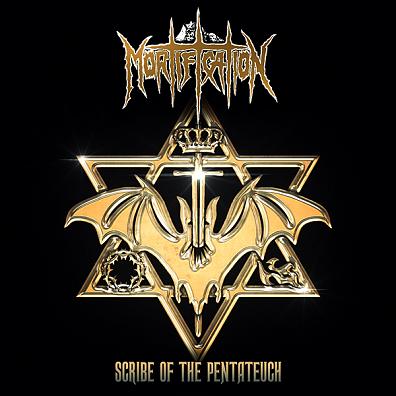 Scribe Of The Pentateuch (re-issue)

“With releases on label giants like Nuclear Blast and Metal Blade, albums like ‘Scrolls Of The Megilloth’ and ‘Post Momentary Affliction’ which are considered classics, world tours and a sound that is constantly being reinvented – having delved into death metal, grind, thrash, power metal, groove metal, classic metal and even a touch of punk – Mortification is a band that cannot be put in box.

…Which leads us to 2013 and Mortification’s 15th studio album “Scribe Of The Pentateuch”, where the band continues experimenting with different sounds and styles. This is high energy thrash blended with the death metal Mortification is known for, along with a touch of doom, classic metal and NWOBHM.

Citing influences like Arch Enemy, Pestilence, early Helloween, Master and early Death, this quality album will not disappoint long-time fans of the band.”

This is a 2013 re-issue of Mortification’s new 2012 album, the Rowe Productions version having already sold out. The Soundmass version contains 8 bonus tracks recorded live at EasterFest 2013, along with a totally new cover and layout.

Bonus Tracks
Live At EasterFest 2013
Extradiefor
Hammer Of God
Scribe Of The Pentateuch
The Jaws Of Life
Blood Sacrifice
The Destroyer Beholds
Scrolls Of The Megilloth
God Rulz
J.G.S.H.